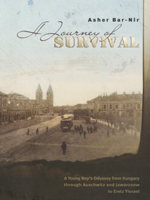 Born in 1930, Karoly Sichermann (now Asher Bar-Nir) and his parents were moved into the ghetto of Nyiregyhaza, Hungary when the Nazis occupied their small town in the spring of 1944. Not comprehending the reality of life in the ghetto, his biggest worry was whether he would be able to go to the cinema on the weekend.

An only child and the center of his parents' world, the young teenager soon found himself alone in Auschwitz and then in the Jaworznow forced labor camp. Throughout his ordeals, he remained naive and trusting of human nature, even once giving a piece of bread to a fellow prisoner to deliver to a friend. (Needless to say it never reached its final destination.)

Liberated in March, 1945, after having survived a "death march," Asher made the long, arduous return to Hungary, but realized he could not remain. He joined the Zionist youth movement Hashomer Hatzair with the goal of reaching Eretz Yisrael. Finally, in May 1948, after being part of the S.S. Exodus, Asher reached "home."