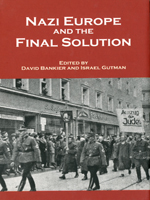 In recent years scholars and researchers have turned their attention to the attitudes of ordinary men [and women]A" during the period of the persecution of the Jews in occupied Europe. This comprehensive work addresses the disturbing question of how people reacted when their neighbours were ostracized, humiliated, deported and later murdered. On the basis of new archival material the authors also discuss the attitudes and actions--or lack of actions--of those who had an official status, or were active in the underground.

The studies present the varying and complex situations that pertained in Europe reaching from states allied to Nazi Germany, such as Slovakia and Romania, to countries like France with a relatively autonomous population; also included are countries like Ukraine and Lithuania, whose nationalist movements viewed the Third Reich as the major factor that would aid them in achieving independence.