Scandalous! The Mediated Construction of Political
Scandals in 4 Nordic Countries 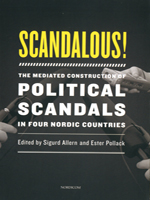 The purpose of this book is to spotlight the way in which political scandals in four Nordic countries have been launched, directed, dramatized and interpreted through different genres of journalism - in an interactive tug-of-war between editors and various political acotrs. News institutions help to build political careers - and to tear them down. A mediated scandalization process can make the path from power to powerlessness, from a top position to exclusion, very short.

A number of questions are discussed: How important are the norm violations that have led to political scandals? Have the types of scandals changed over time? How many rivals and political opponents use mediated scandals? Are character assassination and demonization typical traits of a scandalization process? Are male and female politicians treated differently? Scandalous! is based on case studies and content analyses of mediated political scandals in Denmark, Finland, Norway and Sweden, including an analysis of the frequencies, types, characteristics and consequences of national political scandals during the period 1980-2010.