What Have We Done? The Surrender of
Our Democracy to the EU 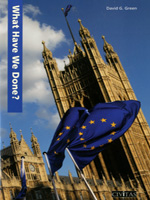 Since joining the European Economic Community (as it then was) in 1973, we have steadily lost the power to govern ourselves. This pamphlet describes the essential qualities of the free, open and democratic system we evolved in over a thousand years of national life. The issue is not the ability of the government to exercise discretionary power as such. Governments have always had a degree of flexibility. But under our constitution the fact that the government can be removed immediately by either the Commons or the Crown changes its behaviour. EU officials have been handed powers by parliament at a time when the constitutional importance of being able to oust the government has been forgotten. But, while our free system has been weakened, it has not yet been destroyed, and it falls to the generations now living to be more reliable custodians of liberty and democracy, and to restore our heritage before it's too late. We now face a fundamental choice as a people. Do we allow the erosion of our democracy to continue? Or do we take back the responsibility that earlier generations wrenched from the grasp of recalcitrant absolute rulers?